I woke up in what felt like the wee hours this morning when hill got up to pee.  Looked at the clock and it was already nearly 7:00!!  It’s overcast, sure, but it is also getting to be that dark time of year.  The clocks will roll back next weekend and that’ll help things a little, BUT then we’ll have to start dealing with the fact that it’s dark by 4 in the afternoon!!  Can’t win for loosing! No handball after work anymore.

I haven’t written anything here for a while.

I’m reminded of the Chekhov quotation..   “Any idiot can handle a crisis, it’s this day to day living that wears you out.”  I’m not sure of the connection, exactly.  Except that when things are in crisis, it brings your mind into sharp focus.  When the goal is simple(staying alive?), talking about it can be pretty simple.  When the crisis is averted (at least for a while) your focus broadens to start including all the smaller distractions that seemed so insignificant when you were putting out the fire.  It’s a lot harder to know what to say when all of those small distractions creep back in.  My brain is busy these days.  Full of competing ideas all wanting my attention.  It makes it hard to do these posts! It leaves me with everything and nothing to say.

I’ve been mountain biking a lot, and it’s like having found religion.  It has renewed my interest in bicycles.

I have interesting projects coming up in the shop, and am mostly quite happy to be working.

It’s been a long while since I had any sort of the diagnostic tests that reassure me that I am well.   I have occasional moments of fear of recurrence, but mostly not.

I play pool every Wednesday with my friend Jeremiah.

Yesterday I got a huge bag of potatoes from Vermont. 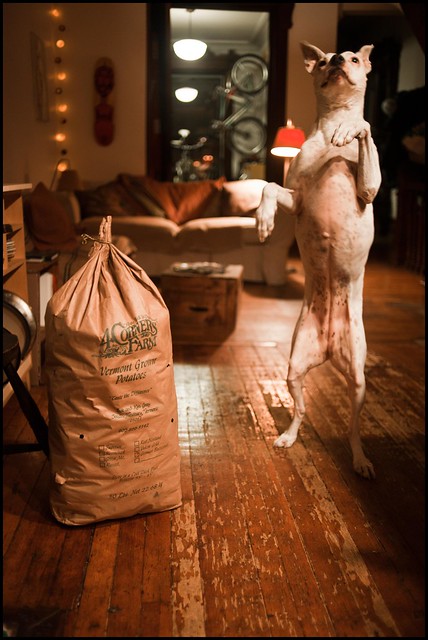 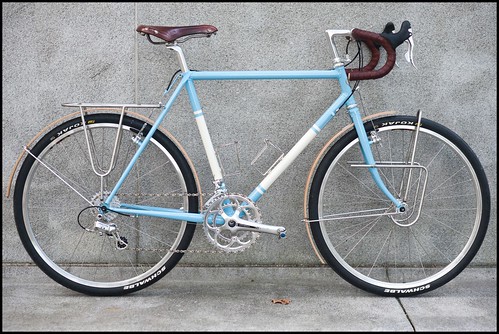 I think I will sell this bike.

In 2010, I built Hill a touring bike. She got it in a pretty raw state with her coffee on the morning of her birthday. She chose some colors and it went off to paint and came back looking quite beautiful, I thought.   (It’s quite possible that the color choices were unwittingly effected by the bedding!  and even her hair?) 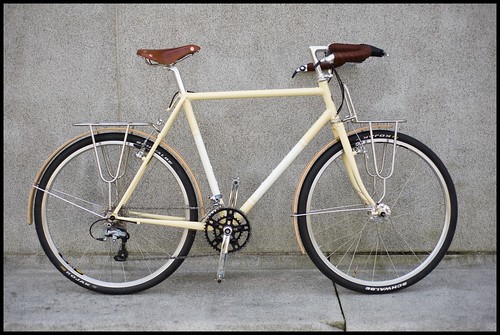 The idea was that as soon as I had the time I’d build myself one too, and we’d go and do some touring.  In particular, we liked the idea of starting in the Seattle area with a visit to the infamous Timmy Corkery, and then heading north through Bellingham (Cory B!), to vancouver (Perfect Tommy), and on to Vancouver Island to see what the west coast Nova Scotia looked like.

This project got a little derailed when, in the late summer of 2010, I recurred and had to be rushed to the hospital for an evisceration!  The surgery was followed by six months of chemotherapy, which I found much harder to endure than my first six month stint of the stuff.  I was completely unable to work.  I sent back a few down payments, and spent a lot of time on my back.

At some point in March, though, my white blood cells got low enough that they weren’t able to give me the normal dose of chemo without risking.. well.. death, I guess.  So, I got a few days less poison that round, and the difference it made was amazing.  I took advantage of it and rushed out to the shop and managed to mostly build myself a frame in about three days.

The following day I was back on the poison, and the debilitating pain that it caused sunk back in until the end of treatment in May.  I didn’t get around to finishing the frame and building racks until the end of the summer, but it DID eventually become a bike. Sort of my dream bike, in fact.  It has the last set of paramount lugs that I had.  No more to be had for love or money.  It has a shiny silver Campy Athena 11 speed group.  Paul Comp brakes.  Chris King, White industries, Nitto, etc etc. 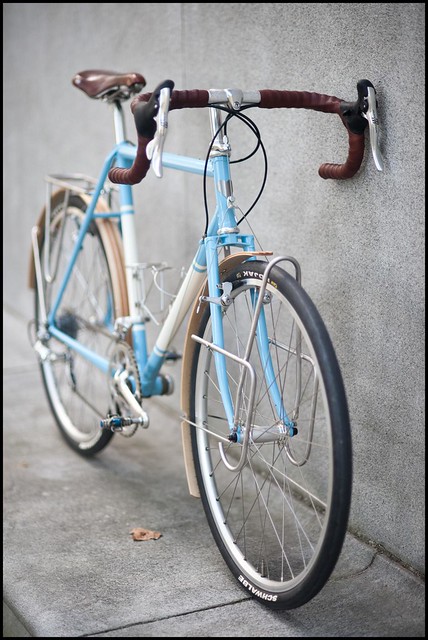 The problem is that I designed the bike for the body that I had, and not the body that I’ve ended up with.  The two herniated disks in my lower back (still no clue about how they happened during a period spent mostly prone) and the sciatic pain that they cause pretty much rule out long days spent in the saddle, even in the reasonably upright position that the nitto technomic stem allows.

So I haven’t really ridden the thing.  It’s got a total of about 150 miles on it.

It’s sad for me.  And also sad for Hill.  It represents the sum total of work that I managed to get done during my last bout of cancer treatment.  It was meant to be the mating pair to Hill’s bike, which would allow us to adventure around together.  Pretty romantic, I thought.  But Hill and I agree that it’s even more sad for that bike with so much love (and money) tied up in it, to simply hang on the wall and not be ridden.  It’s a great bike for SOMEONE.  Not me.  And maybe I can use the money to build myself something that I WILL ride.

I’m about 5’8″ and normally proportioned.  If you don’t have back problems, and like bike touring, this might be a great bike for you. I can make it available for test rides for anyone who wants to come for a visit.

So that you have a sense.  If you were to order a bike like this bike from me, it would have a price tag in the $5500 range.  Naturally, I would sell this one for considerably less.  We can talk.

Come to think of it, maybe while I’m at it I’ll unload this thing too! 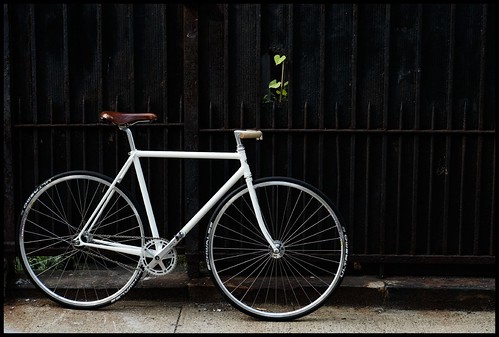 Teaching cancer to cry is here in its new location.  Seems to have worked.  Again, I’m sorry for the disruption, and I’m particularly sorry about any potential permalink fatalities. Please be patient as we work out the kinks here.

Also pretty excited to announce that the new Fast Boy Cycles page is up and seems to be running.  Go check it out and let me know what you think.

I can access it but the videos show in a fast-forward mode… no intelligible audio [I hear gibberish]… boy you can chop onioins and garlic tres vite!

Can’t tell whether this was a joke, or an accidentally honest review of the films!

Fast Boy Cycles has a new website!   Years ago, when I first started to build bikes, my BFF Megan made me a beautiful website and the company went live.  Over the years we have massaged it and altered it to try and make it reflect the development of Fast Boy Cycles.   Finally, though, it has proved too complicated for me to stay on top of and to update with new images and content.  SO.  With help and advice from family and friends, I’ve built a new page.  One that I can change any time I want and keep dynamic and current.

The new site includes a process blog, which will be separate from THIS blog.  For those of you who are more interested in bikes and bike building than sickness and poop, that’s the blog for you!  I’ll be trying to document changes around the shop, and solutions that are turning me on, in case those bits of information are useful or interesting to anyone out there.

The new site will go live sometime in the next day or so!  Keep an eye out at fastboycycles.com.  There are likely to be hiccups.  Be patient.  When that happens, this URL will die!

Those of you who still check in on this blog frequently, thank you.  Thank you for continuing to follow along.  I’m sorry (and I’m not) that there aren’t more frequent updates these days.   The truth is that this blog was put together (also by sweet Megan Ann) to document the treatment of my cancer, and to pool that information in one place for the friends and family that wanted it.  Currently there’s not much to say on that front!  Happily!  Miraculously!  For those keeping score, my cancer is stable and I will be screened (petct and colonoscopy) every 6 months, down from 3.  Glorious. This blog WILL stay active.  It will be relocating, however.  Sometime over the course of tonight, this blog will move to teachingcancertocry.com, and the Fast Boy Cycles site will begin to go live. I am very sorry for any inconvenience, and I’d be very grateful if you’d update your links and or bookmarks.

Finally.  And reluctantly.  Fast Boy Cycles is on FacePlace.  Whatever.  Friend me or poke me or whatever it is that you do over there and try to be patient as I figure out how that whole place works.

Sincerest gratitude to all of you.